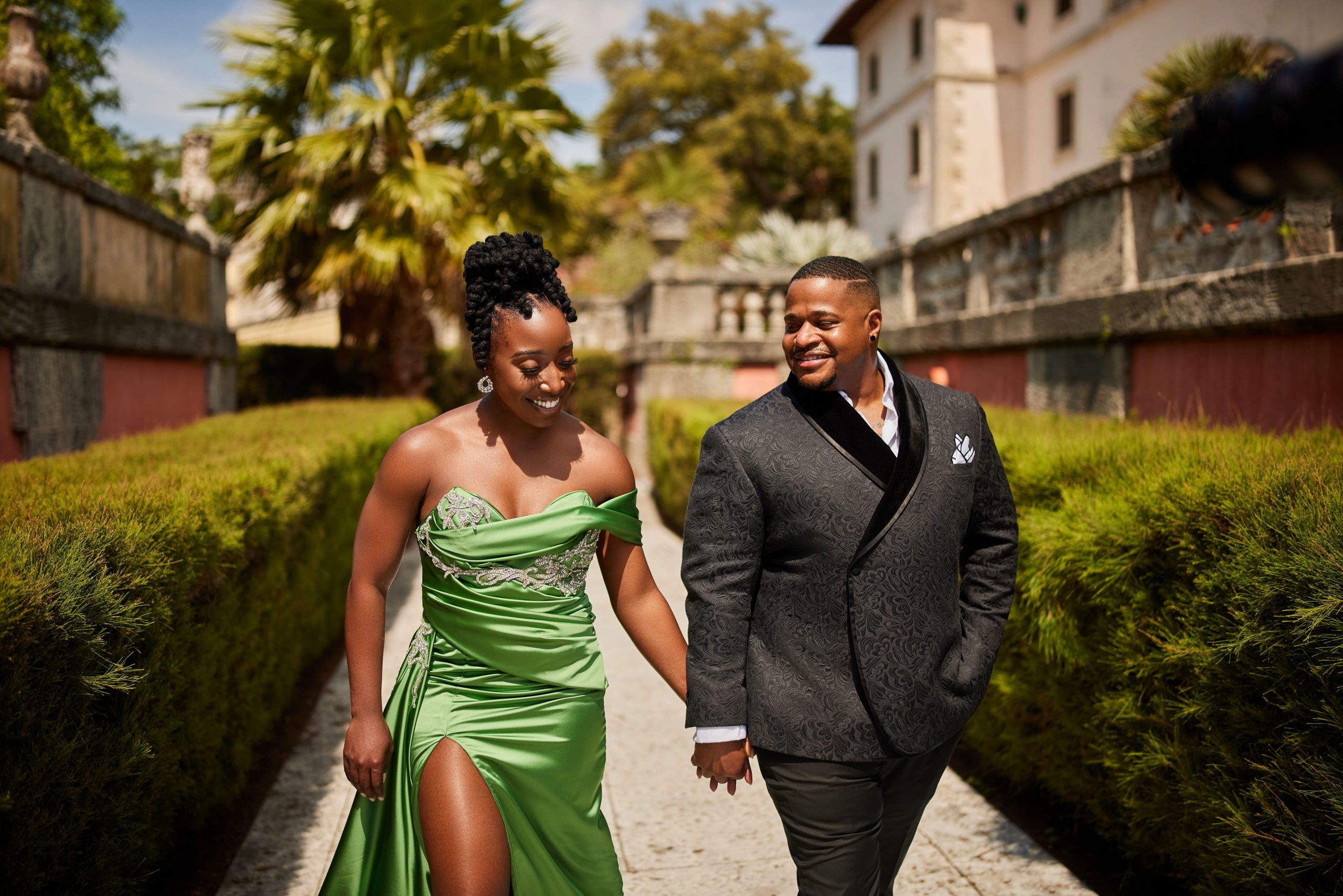 Shanel and Anthony’s engagement session was held in sunny Miami, Florida at an old Miami train station and Vizcaya Museum and Gardens. 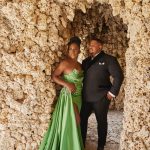 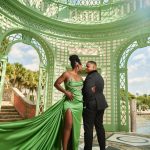 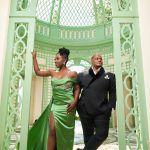 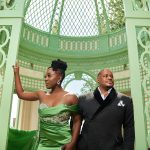 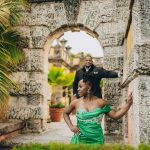 Here’s how they met….

On Saturday, October 26, 2019, Shanel decided to change her route home from an event in Uptown Charlotte, North Carolina. As she passed Johnson C. Smith University (JCSU), she noted a lot of activity on the school’s grounds, so she decided to stop, hang out, and enjoy herself. The occasion was JCSU’s homecoming, and while winding her way through the various displays, the weather got to Shanel, and she soon became hot and irritated. In search of bottled water, Shanel found herself at Kappa Alpha Psi Fraternity’s tent, where, unbeknownst to her, Anthony was collecting donations for the chapter. Although Shanel and Anthony disagree on their first interaction (with Shanel asserting that he tried to make her pay for a bottle of water and Anthony insisting that he did not), they both agree that their conversation evolved from bantering to flirting to an intense hours-long soul meeting that stretched from Saturday afternoon into the late hours of the evening. As event responsibilities called him away from her, Anthony’s tunnel vision turned to fear that he would never see Shanel again if he left her side, yet Shanel calmly reassured Anthony that she would not leave before his return. As the evening drew to a close, and they exchanged numbers, Anthony, already confident that Shanel was “the one for him,” saved her number in his phone as “Shanel Middlebrooks.” Though Anthony returned to his home in northern Virginia, they spoke regularly. Within several weeks, Shanel visited her father who, incidentally, lived about 30 minutes away from Anthony. Soon she spent more and more time in Virginia until deciding to relocate there in 2020. 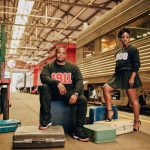 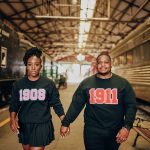 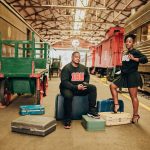 Shanel and Anthony honor their meeting date as their anniversary which they celebrate each month with a dinner and date night. “We have really busy lives,” Shanel said, “during the week, we barely see each other. So that one day a month is a special day.” Busy indeed: both Shanel and Anthony work while also attending graduate school full time at George Mason University and American University, respectively. As the couple were heading out for their monthly dinner on April 24, 2021, Anthony detoured to the mall where he proceeded to drag Shanel to multiple cheesy mall kiosks in order to look at engagement rings. Already hangry, Shanel became more irritated when Anthony declared that he’d “forgotten” his wallet and they needed to return home. But it was all a ploy, as Shanel was unaware that Anthony already had the ring. Shanel also didn’t know that her mother and sister had flown in from their native U.S. Virgin Islands and, along with her father and cousins and Anthony’s mother and twin brother, were at the couple’s house, working together to quickly set up a romantic backdrop for Anthony’s very next step. So 18 months from when they met, Shanel entered their home, looking for Anthony’s wallet. Instead, she found herself surrounded by beloved family, with Anthony on one knee in front of her, asking her to spend the rest of their lives together. 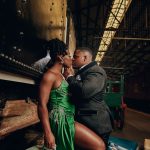 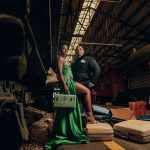 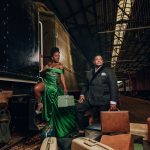 Take a look at their beautiful engagement video.

Their wedding took place on September 10, 2022 at the Country Club of Fairfax in northern Virginia.  We’re so excited for their union and can’t wait to see how their love story unfolds!

Get Stunning Inspiration Straight to Your Inbox

Join our Stunning community to get access to exclusive content and ideas to plan your best day ever.

You have Successfully Subscribed!